It all started as an intonation issue. The strings are very rubbery/slinky and they move a lot.....sooo the action needs to be on the high side. This means the string stretches and plays sharp, so we place the saddle to accommodate this. On this bass the bridge is straight across and the G and D strings are quite flat. Solutions?  Recut the saddle slot, add a piece in front of the saddle, don't play up the neck. A handy piece of maple was wedged between the top and the string as a way of finding the right spot for the intonation to be correct.

The right spot was in front of the bridge. A small piece of walnut was slotted and a two string saddle was made. Although this was better it brought us to the "How do you feel about playing a fretless bass" conversation. The owner was game.

There's a tool thats been around the shop for over twenty years, it's a piece of maple with a sharpened piece of hacksaw blade jammed into a curved groove. It and a hammer cut a curved piece of veneer to fill in a fret slot. It was made in the eighties when making fretted basses fretless was "The Mod". It's gone, it will probably roll out from under a bench or fall out of a box at some point. After half an hour of searching it was time to make a new one. The pictures tell that story but basically a groove was cut in a new piece of maple, a short length of hacksaw blade was sharpened and then stuffed into the groove along with some white plastic binding.  CA glue holds it all in place. (CA short for Crazy Adhesive)

The pieces were cut and then glued into place with Titebond. CA glue is the usual choice in this shop, but not this time. We're not sure why. The tiny plane was used to trim the maple veneer flush and then the whole fingerboard was sanded with 150, 180, 220, 320 ......and then steel wool, 0000 steel wool, the good kind from Lee Valley that doesn't fall to pieces. The Bulldog stuff is so inferior it should be called something else like steelish wool. Or bits-of-steel-that-can't-wait-to-get-everywhere wool. It's the kind of thing you should buy as a gift for someone you don't like.

It was a solution that worked, the customers happy taking on the challenge of playing fretless and the bass sounds better as a fretless. And the shop has a new fretless bass veneer cutting tool. It needs a better name. 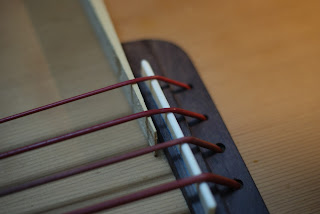 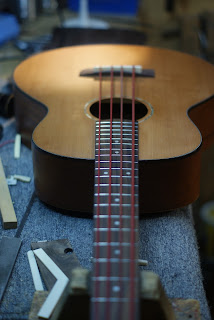 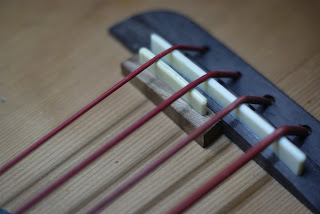 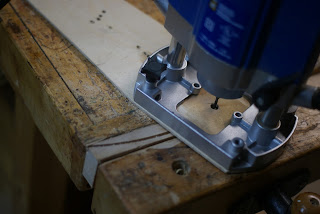 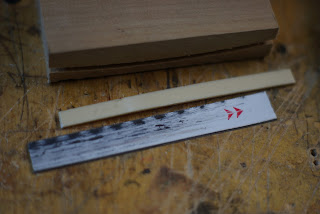 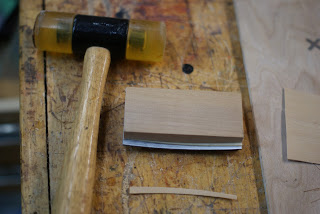 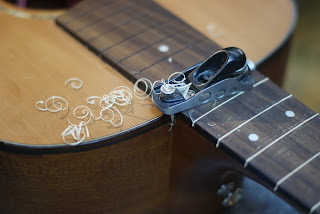