An old Gretsch flat top started out life with the saddle a quarter of an inch shy of its scale length. A previous repair, avoided top and bridge plate patching by using a pinless bridge. Sadly it didn't last or work that well, I appreciate the idea though.
The original bridge had nuts imbedded in the top and two screw's that went through the bridge adding mechanical strength to the glue joint. This is important because it meant those holes and the original bridge pin holes needed to be filled, ideally adding some structure at the same time.
Eighth inch thick maple plugs were made with a plug cutter and used to patch the bridge plate first. A template made with a 5/8" inch forstner bit was used with a bearing guided router bit to make the matching hole.
The factory installed birch bridge plate was too soft, it needed stiffness and strength. A one sixteenth hardwood bridge plate was needed to consolidate the bridge area and provide a good surface for the ball ends of the strings to bear against. This would be done before the plugs were put in. A scrap of paper was used inside to crease around the plate edges and braces making a pattern of the bridge plate. When the bridge plate was properly fitted a matching caul was made and the new piece was glued in.
With the maple plug fitting just a little bit proud of the bridge plate surface the whole process was repeated with a 3/4" spruce patch sitting on top of the bridge plate. At this point both of the bridge nut mounting holes and four of the bridge pin holes were filled in.
A new bridge could be made with the saddle in the right place and the new bridge pin holes could be drilled without conflict from the original bridge.
This bridge would be made slightly oversized to allow the saddle and bridge pins to be moved back and a little low to avoid a cost prohibitive neck reset.
A pattern was made using the pinless bridge that had been on the guitar. Then it was cleaned up and made symmetrical with a folded piece of paper.
The pattern was traced onto the rosewood and rough cut with a bandsaw. The top profile was machined with a drum sander and fence. The front profile was created with the thickness sander jig.
*I didn't invent this jig but this is my version of it. I first heard of it from a repairman that I worked with years ago and then saw another version of it on a bow making site.*
With the bridge dry clamped in place the slot was marked and drilled to depth with an eighth inch brad point bit at each end. Now the bridge was ready to be glued in place. The previously mentioned bridge plate caul was used to glue down the new bridge.
With the bridge solidly glued in place the saddle slot was finished and a temporary saddle was put in to check the intonation.
The intonation is spot on and the guitar sounds great, a warm round low end with lots of harmonic wash in the top end. A bit of set up work a new saddle....the guitar that had never played in tune or sounded right did both now. 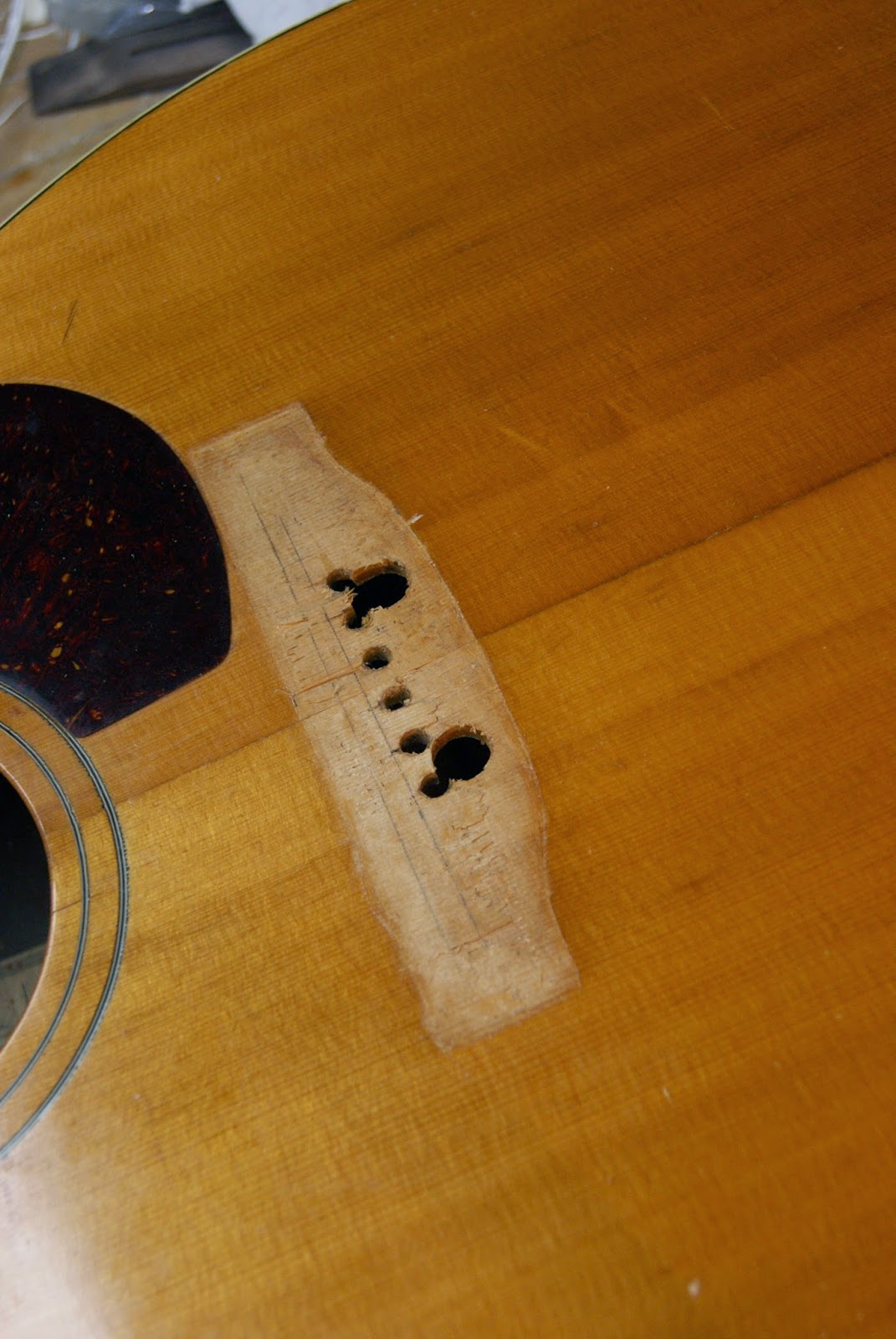 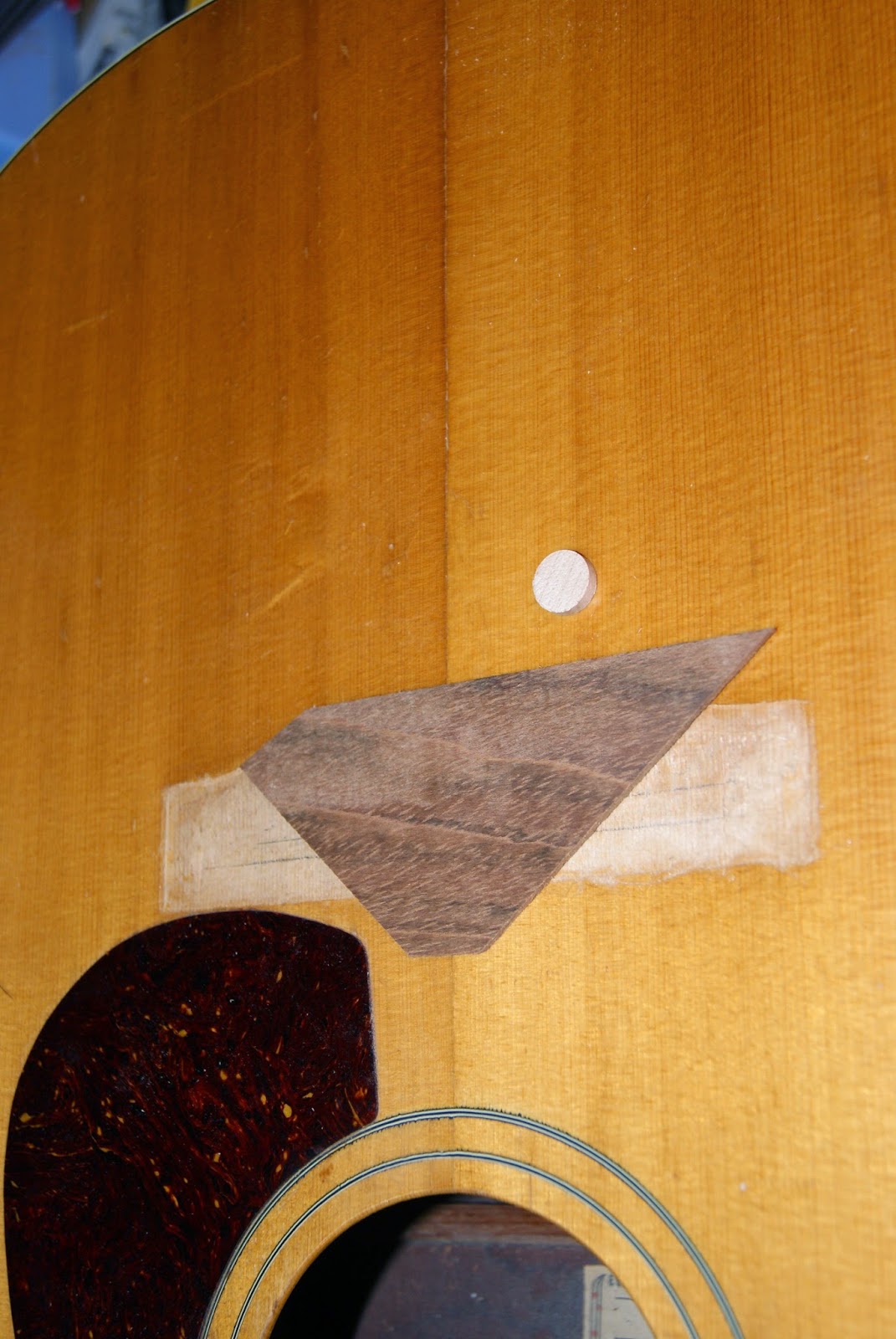 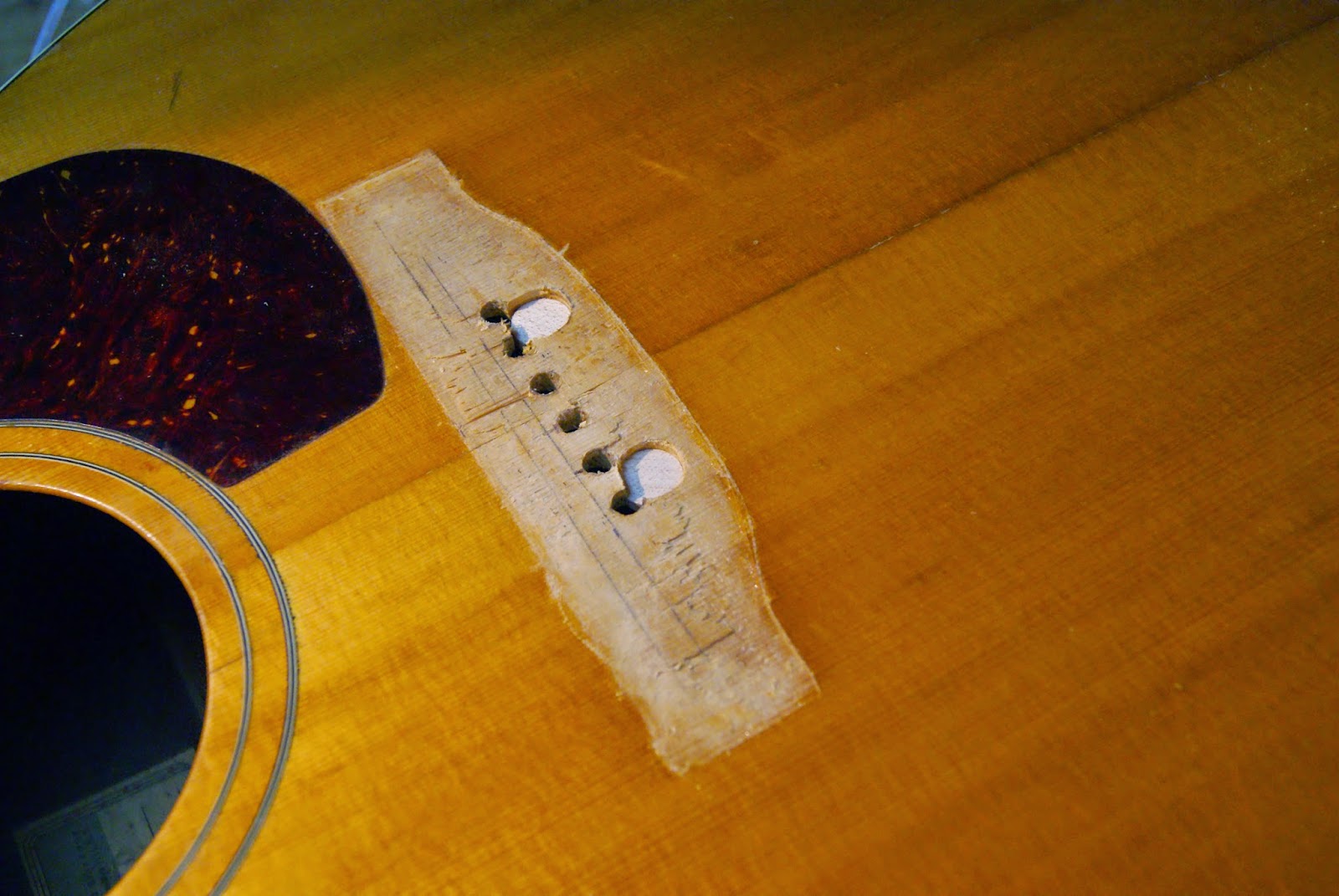 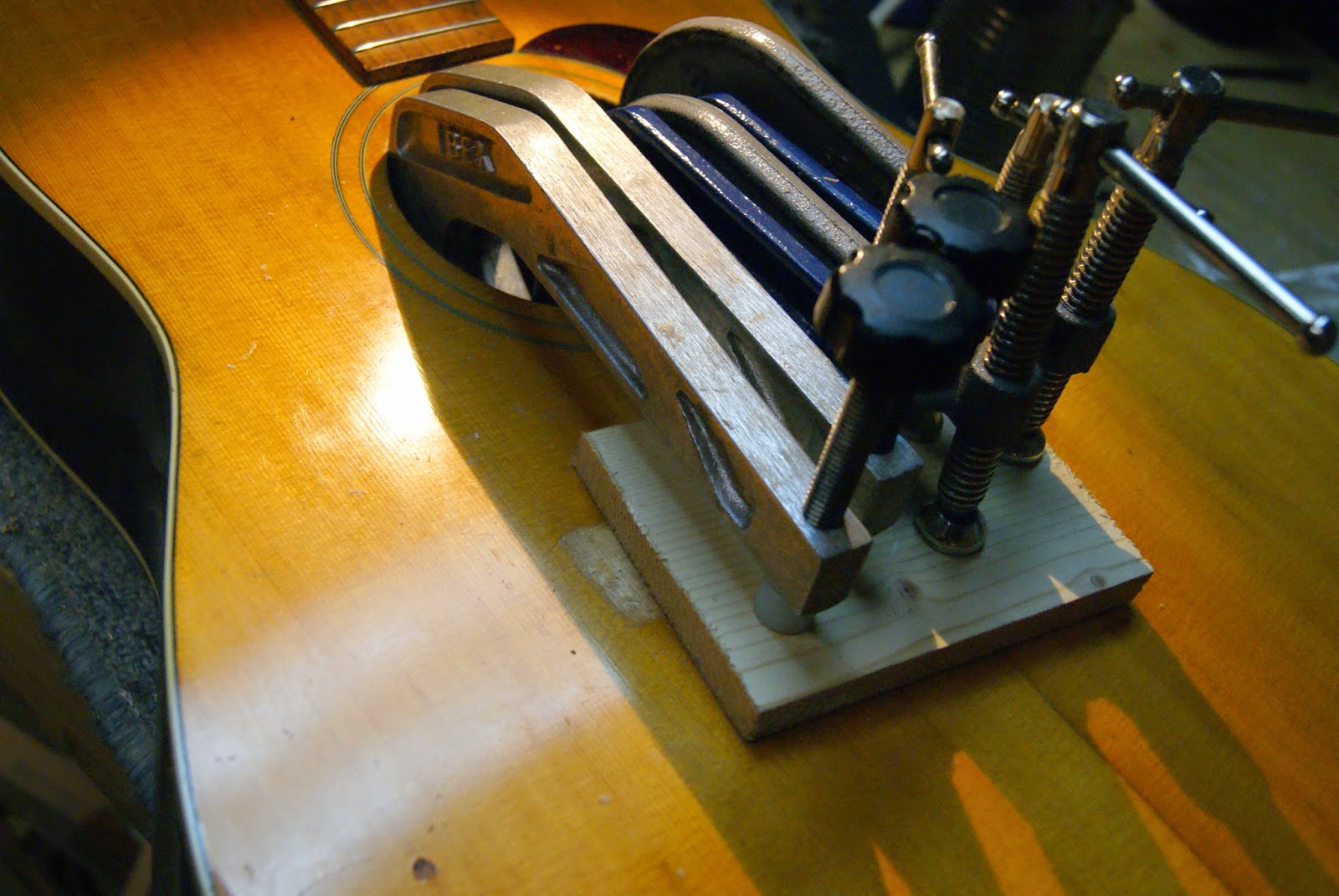 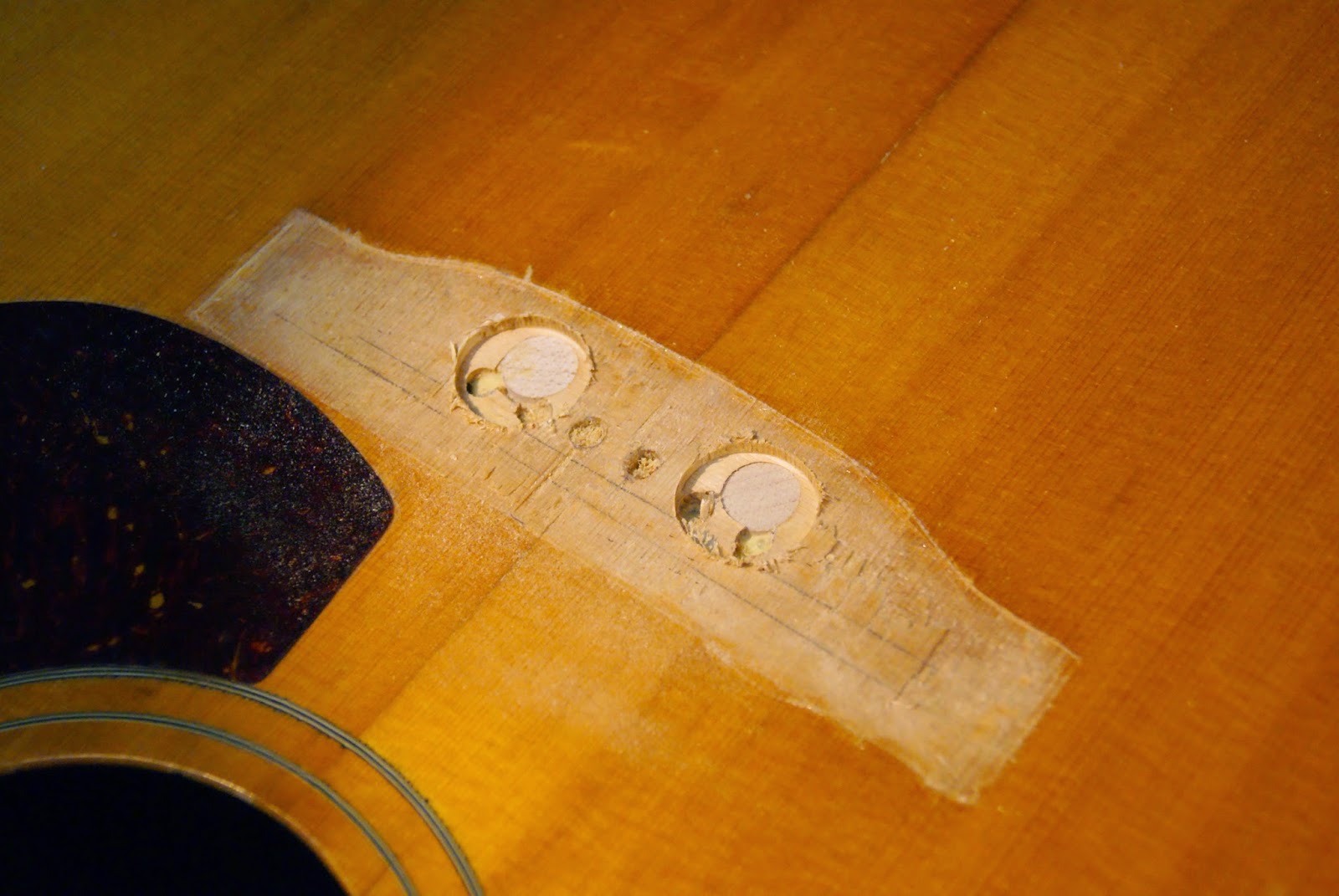 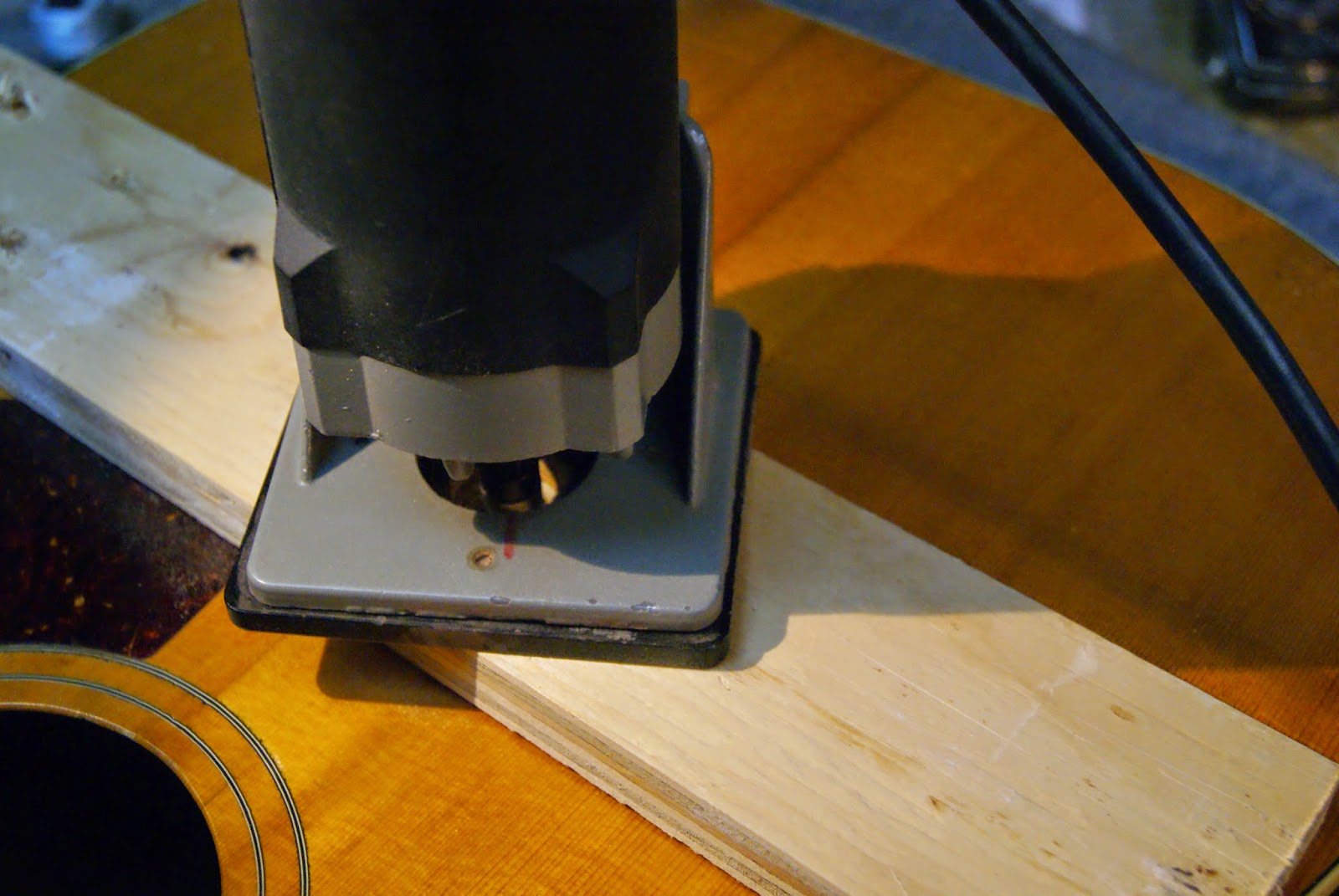 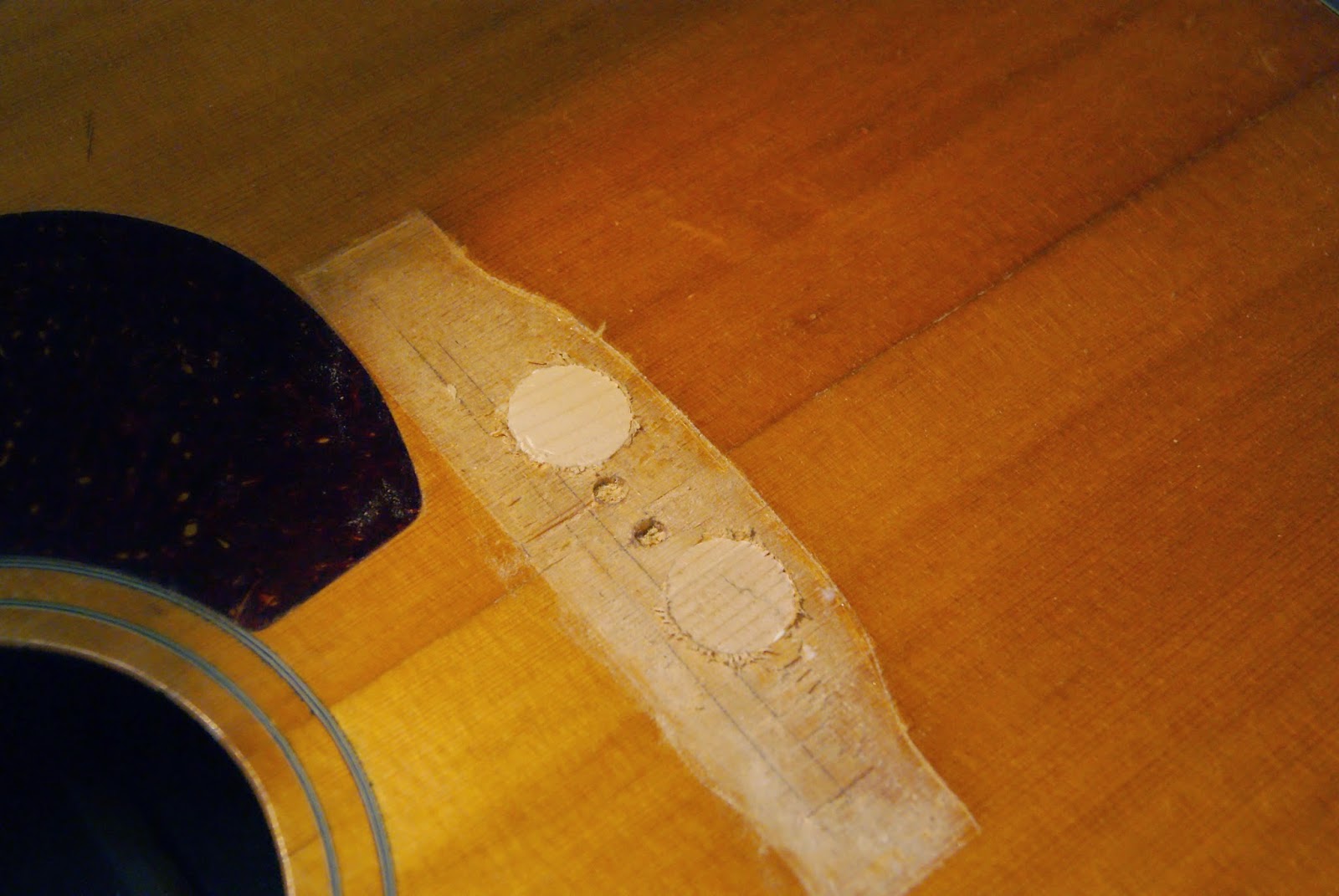 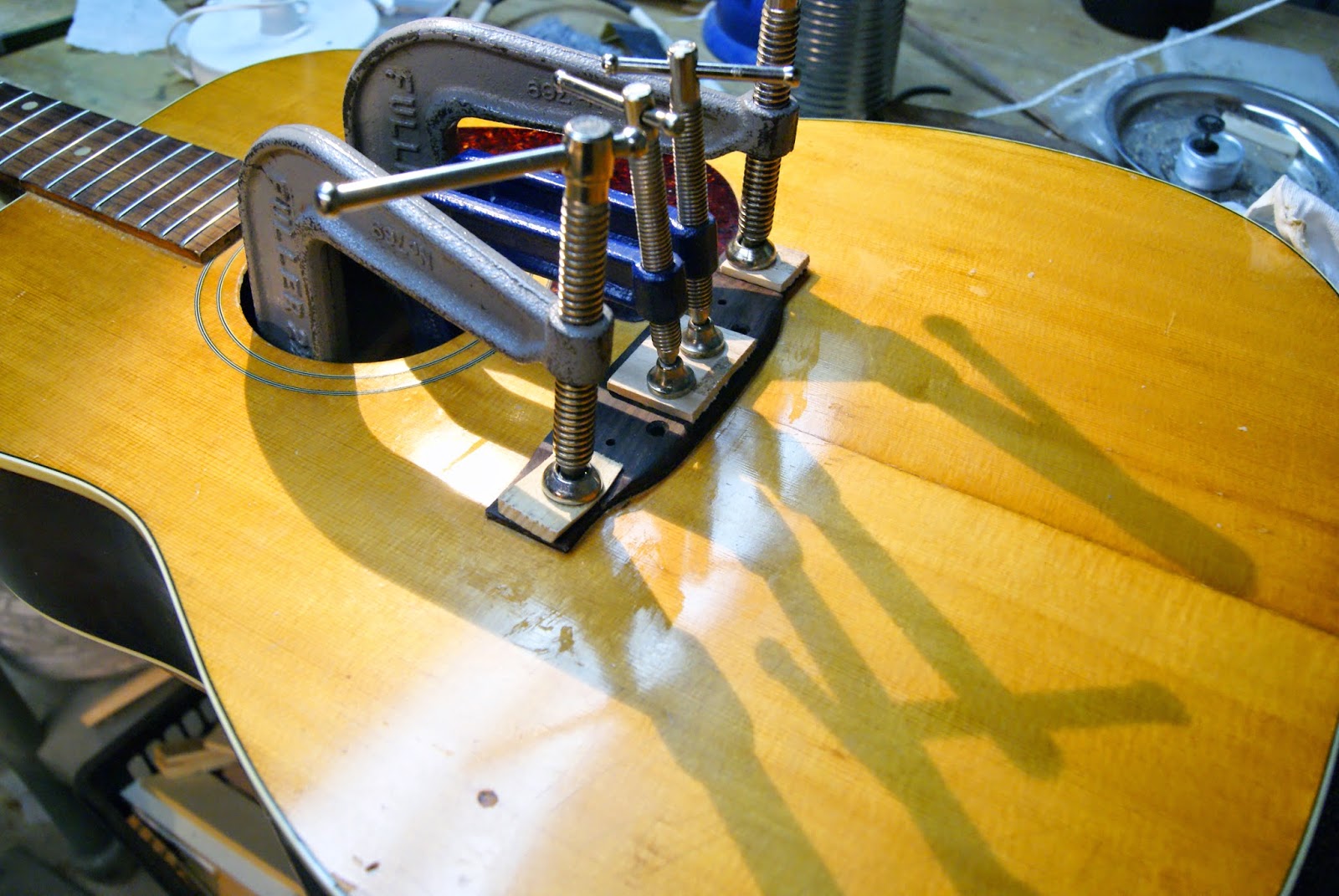 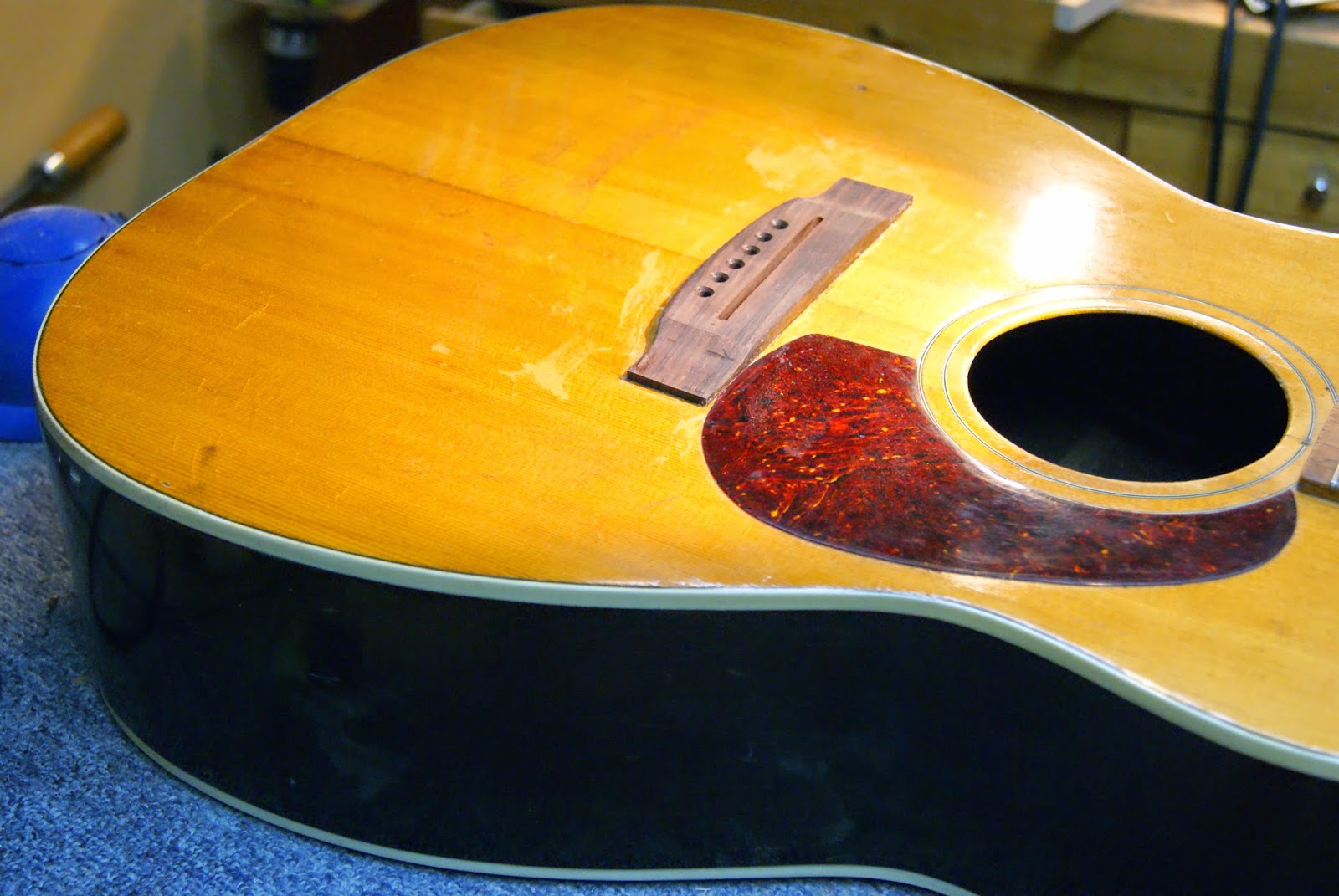 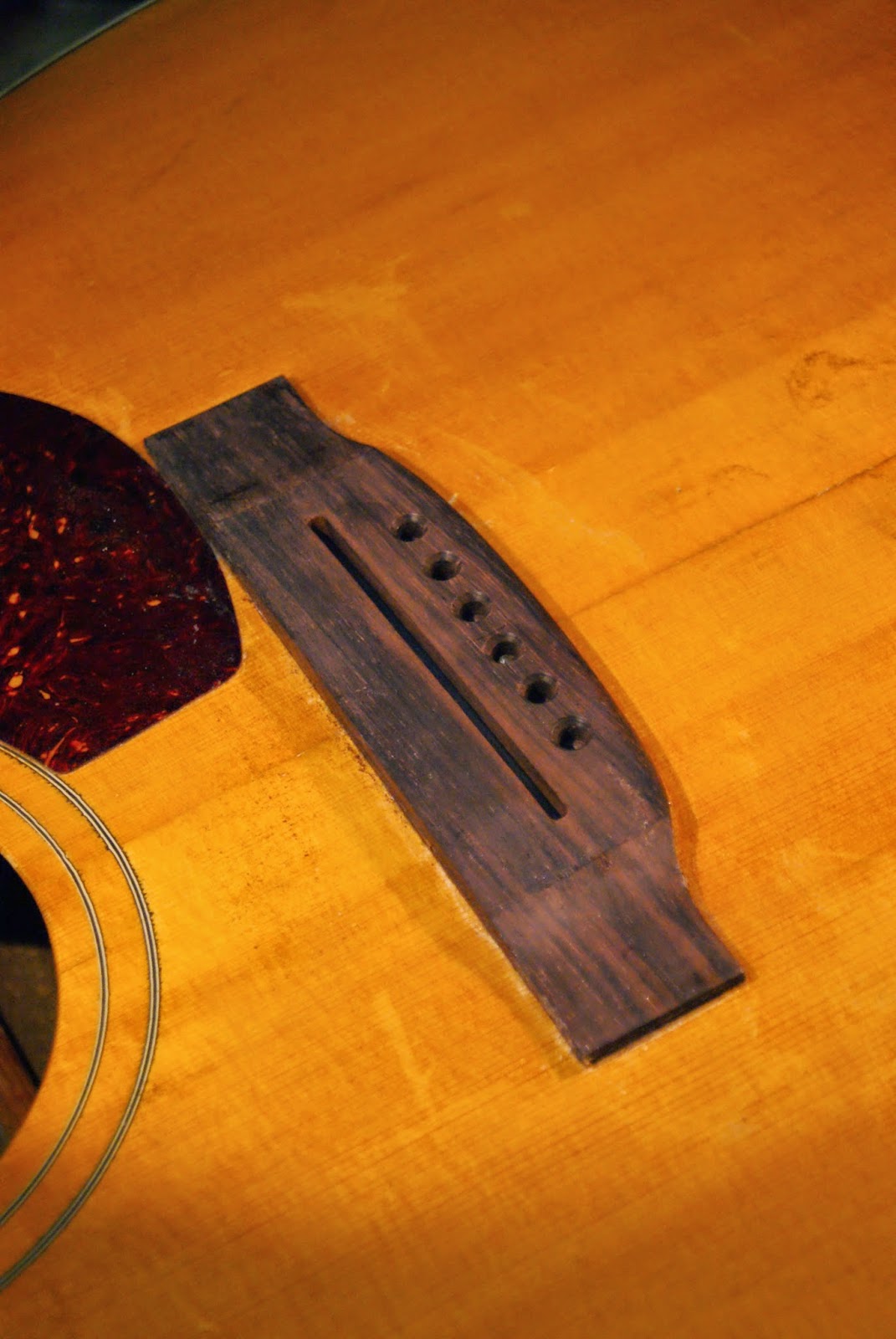 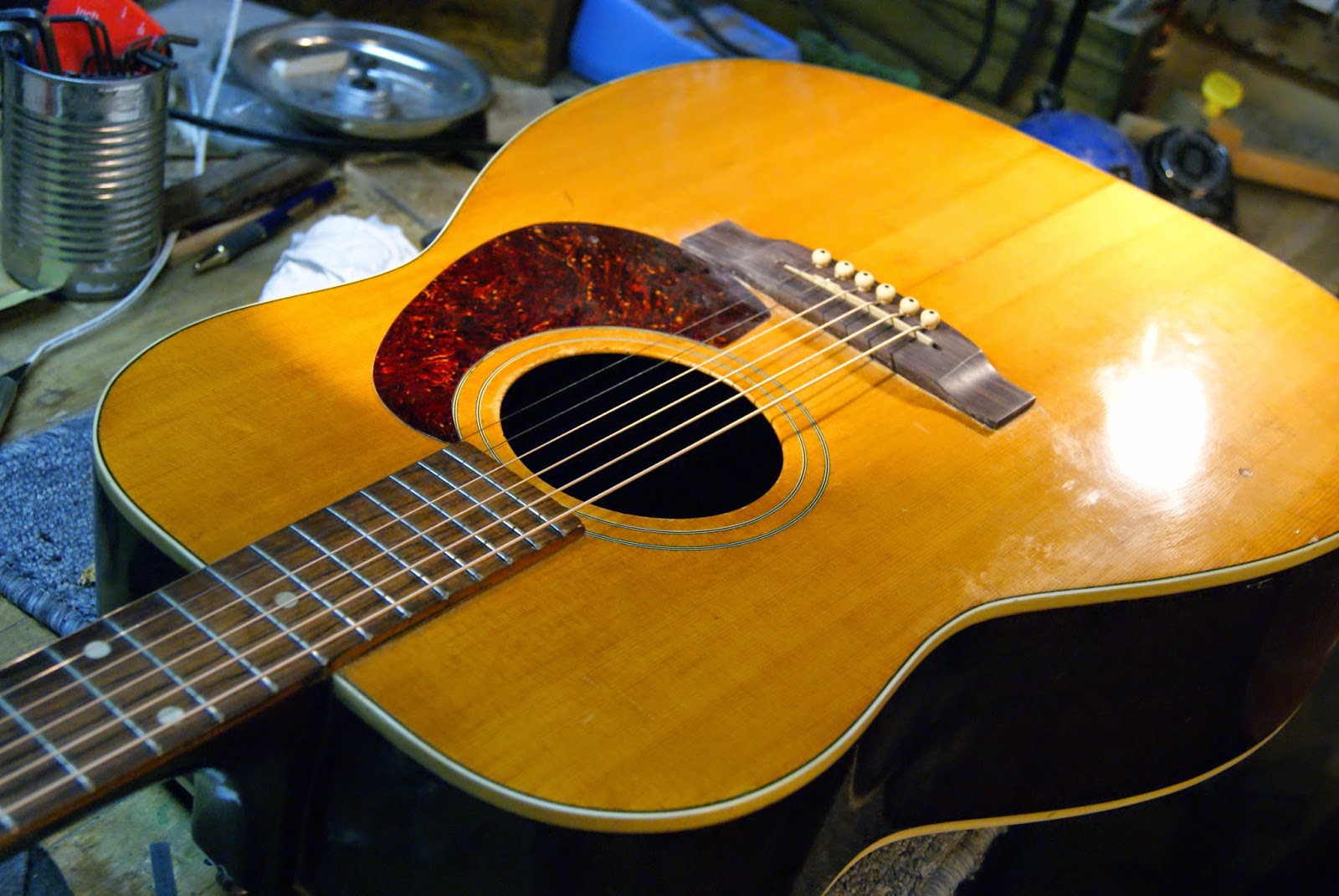 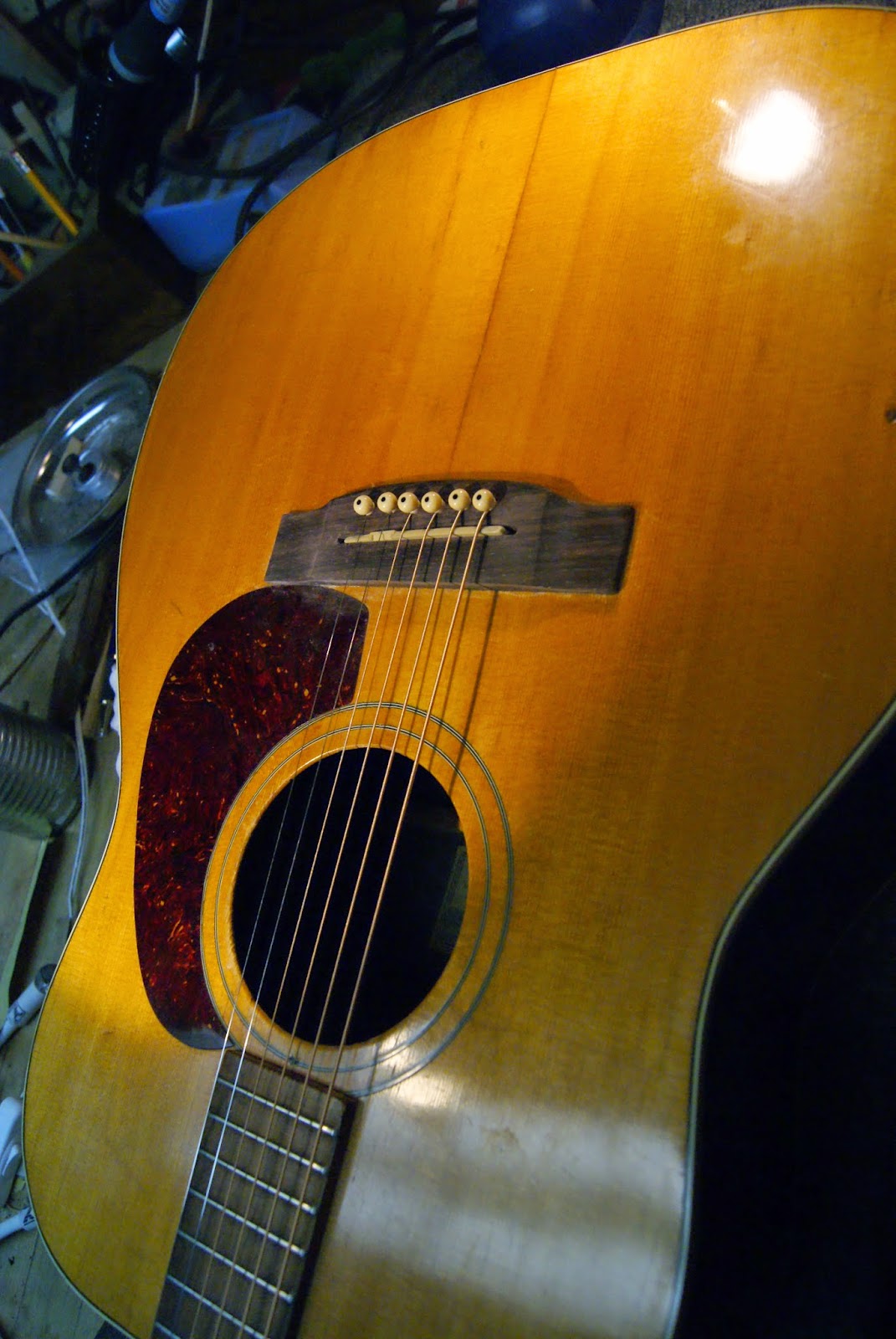 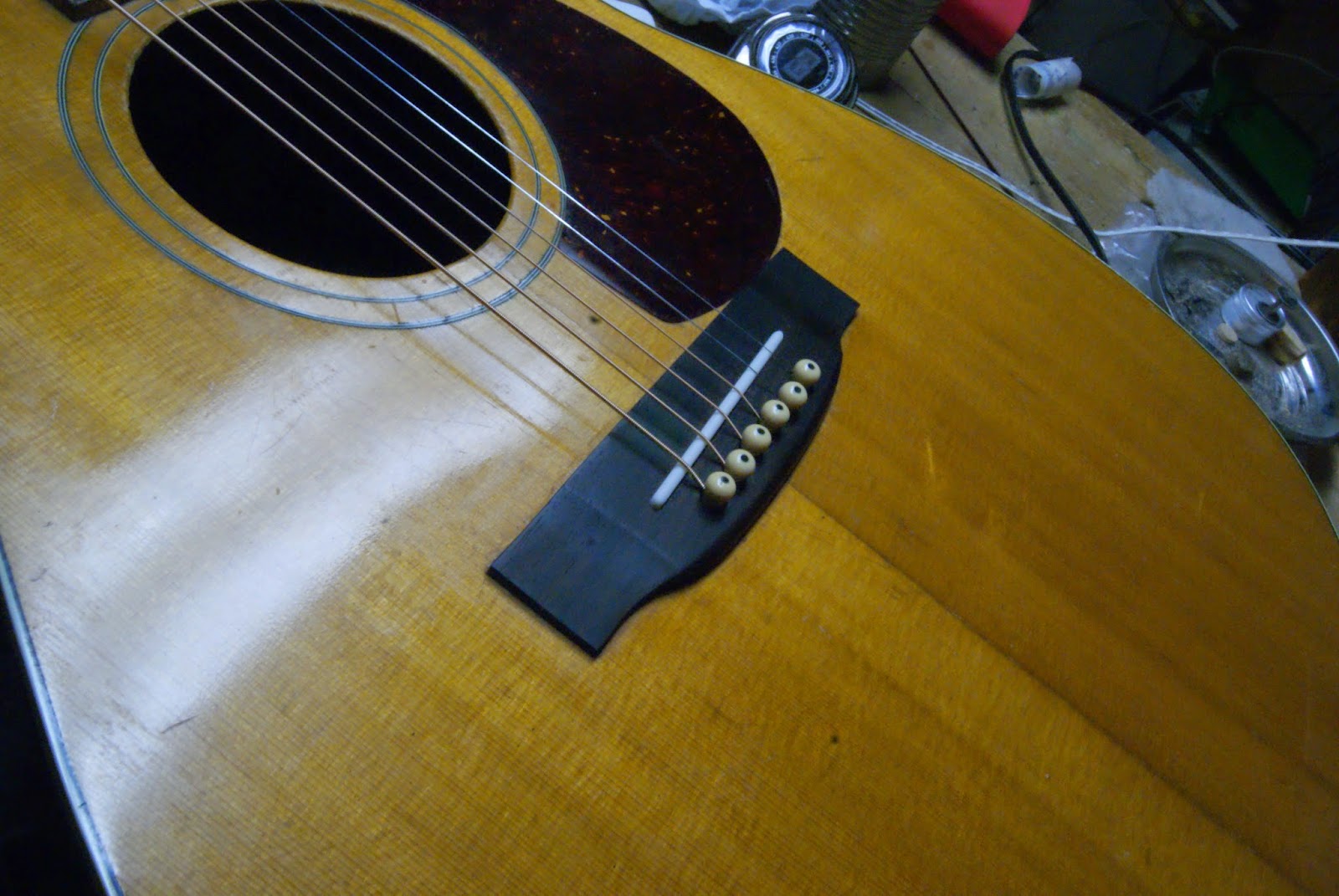 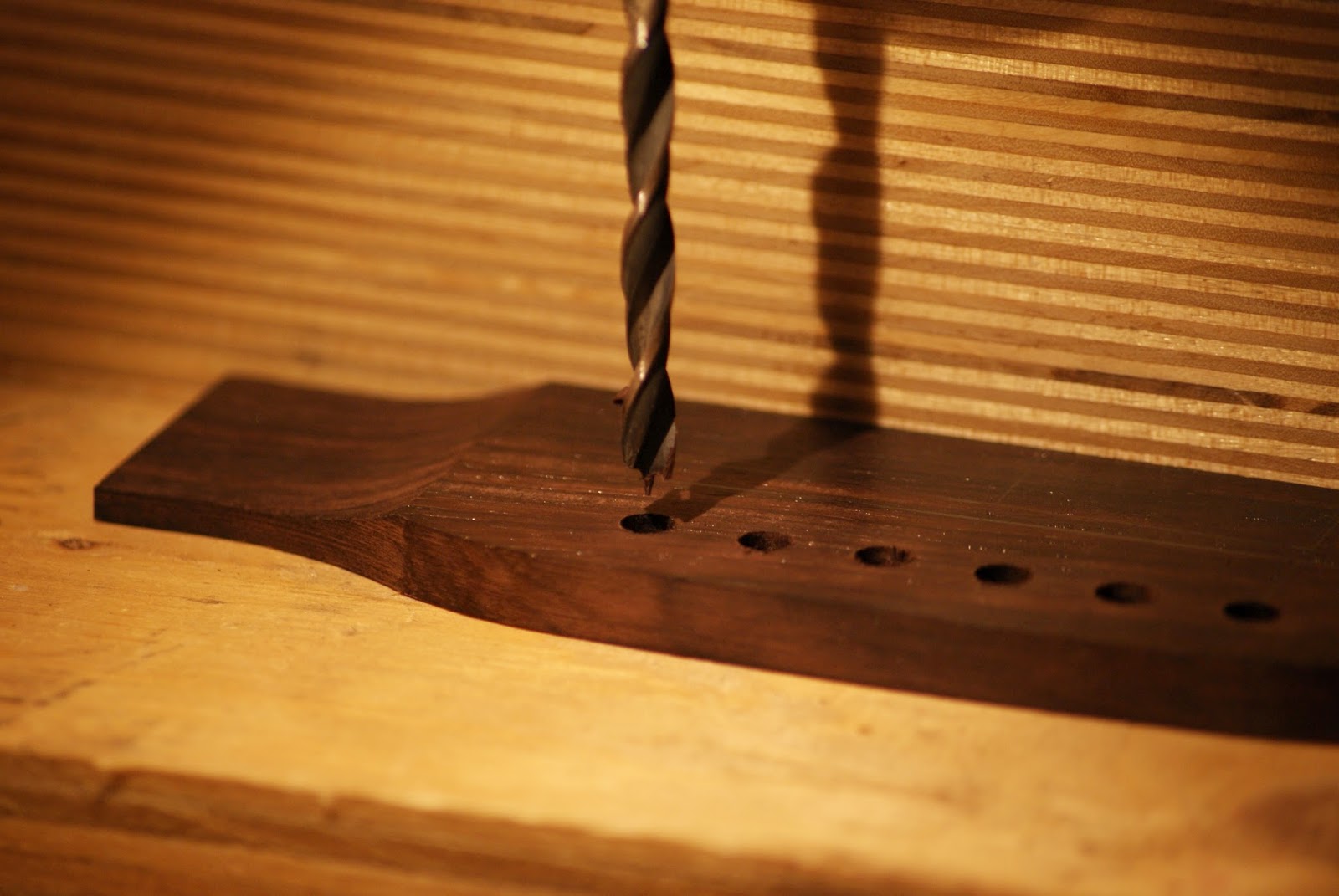 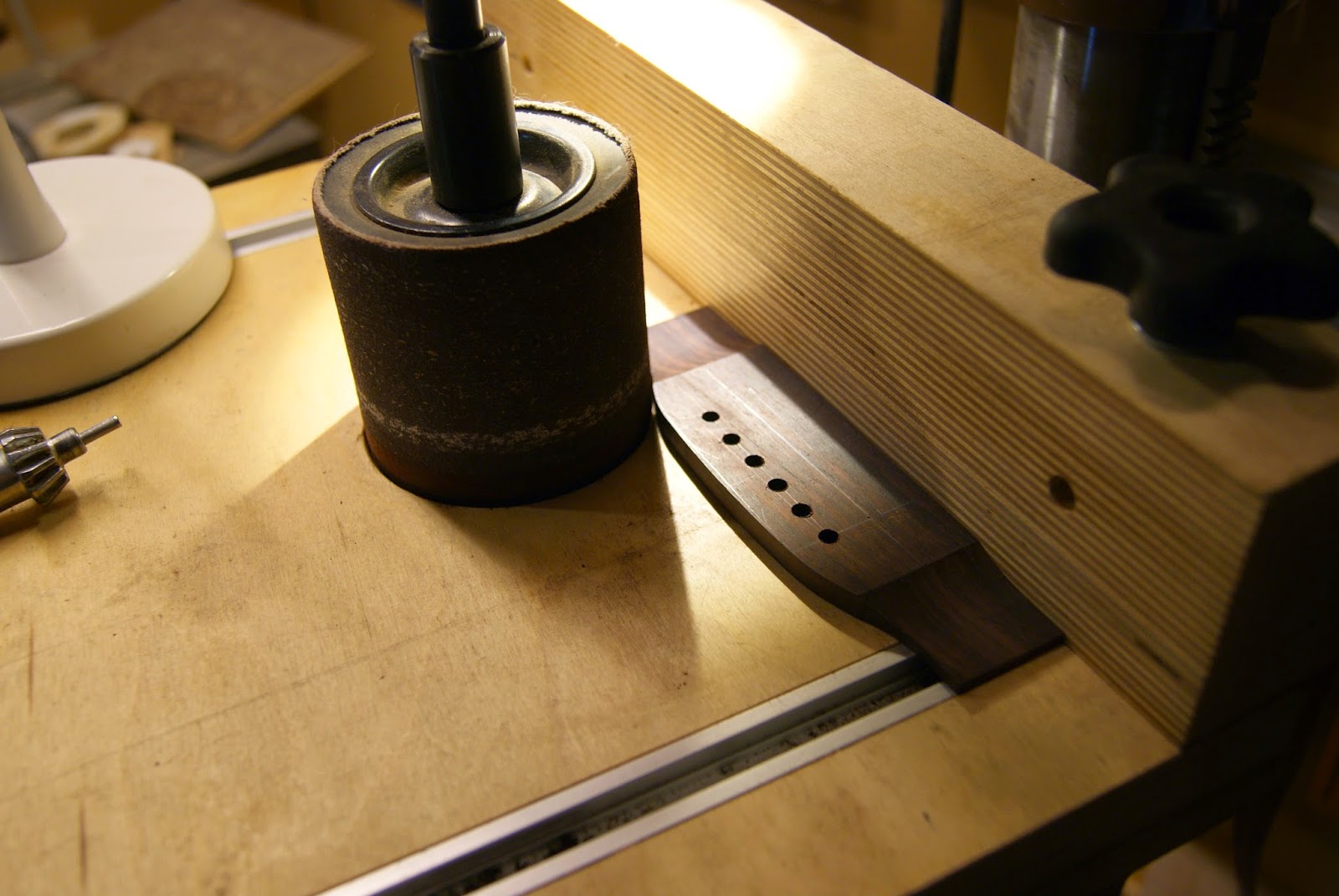 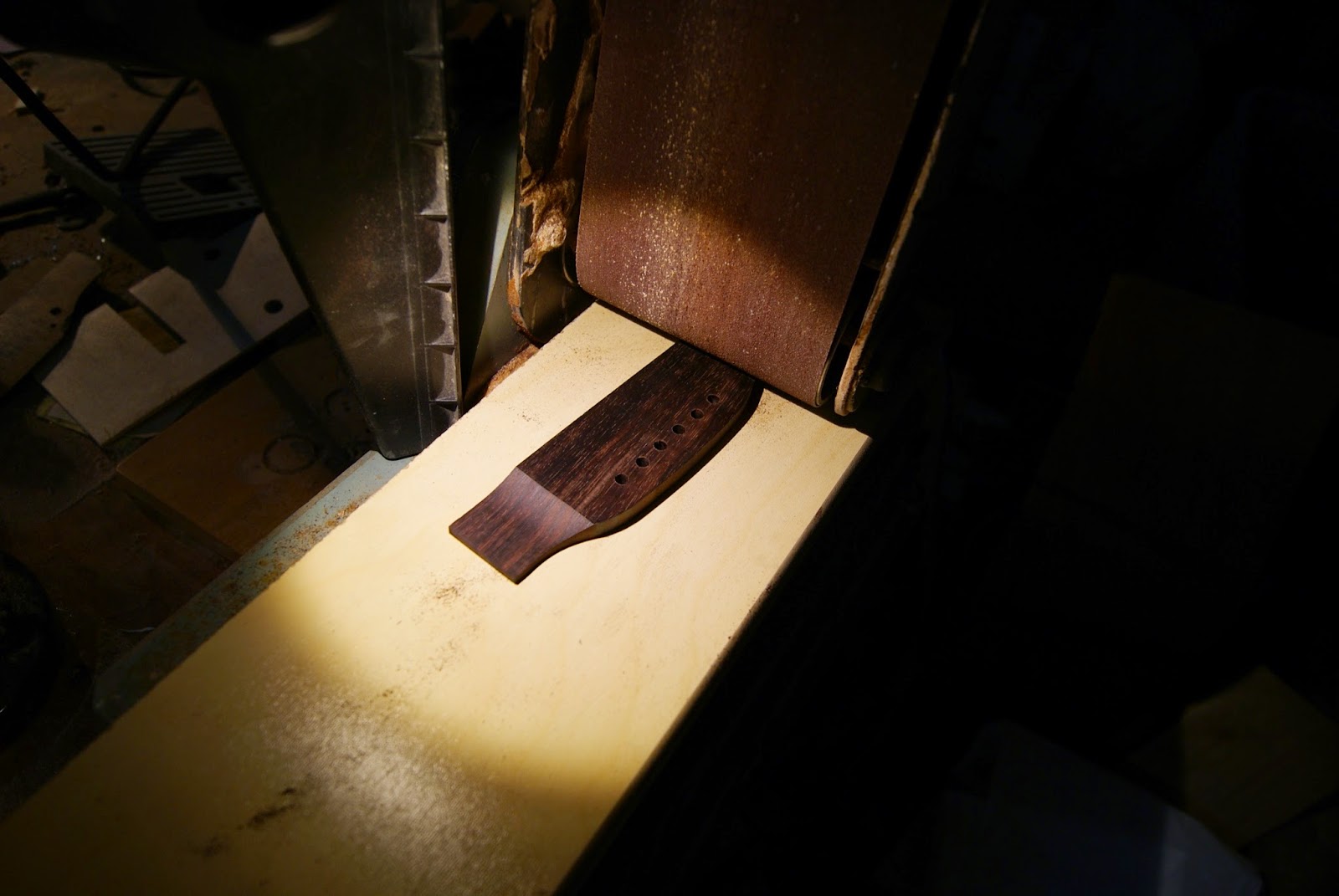 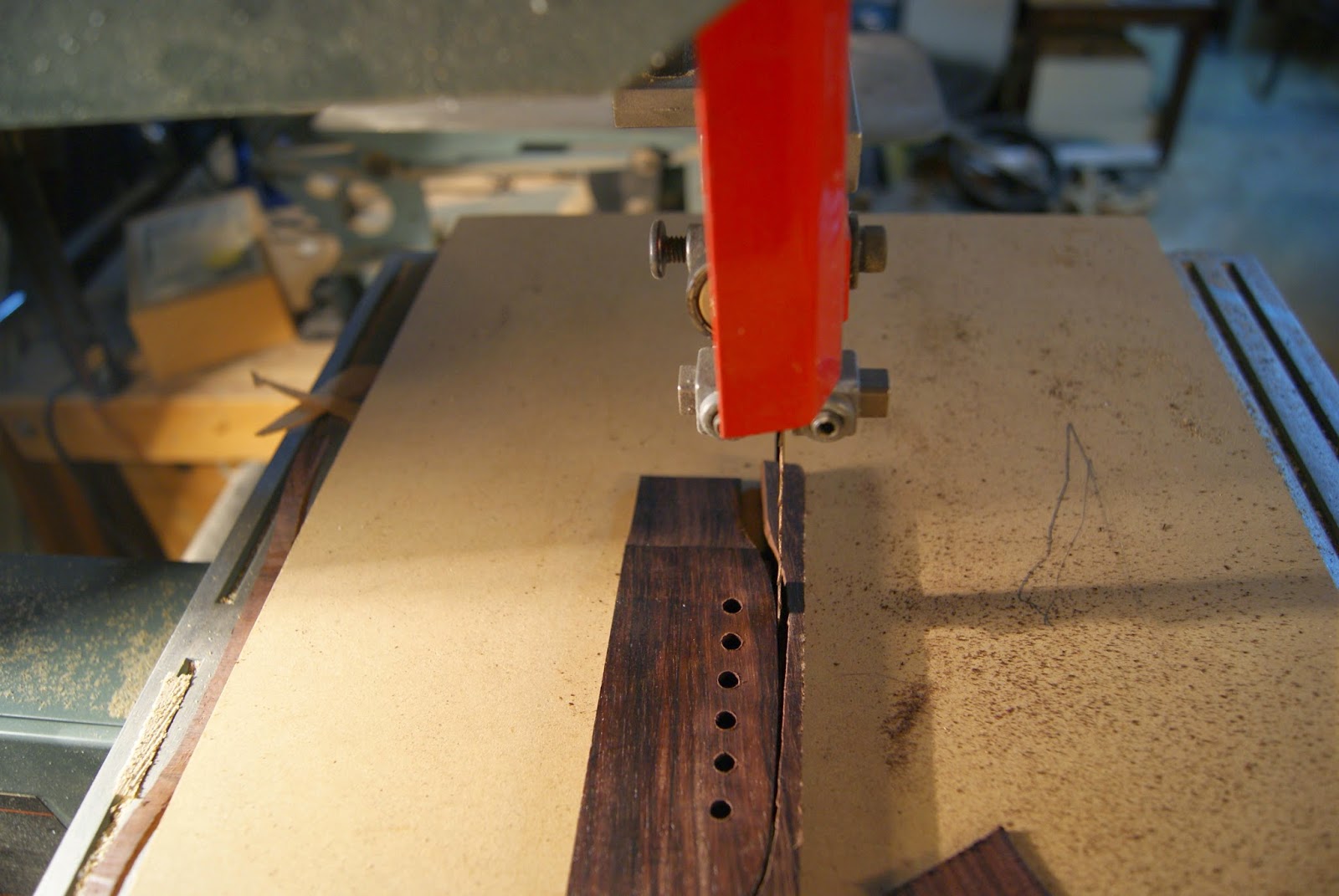